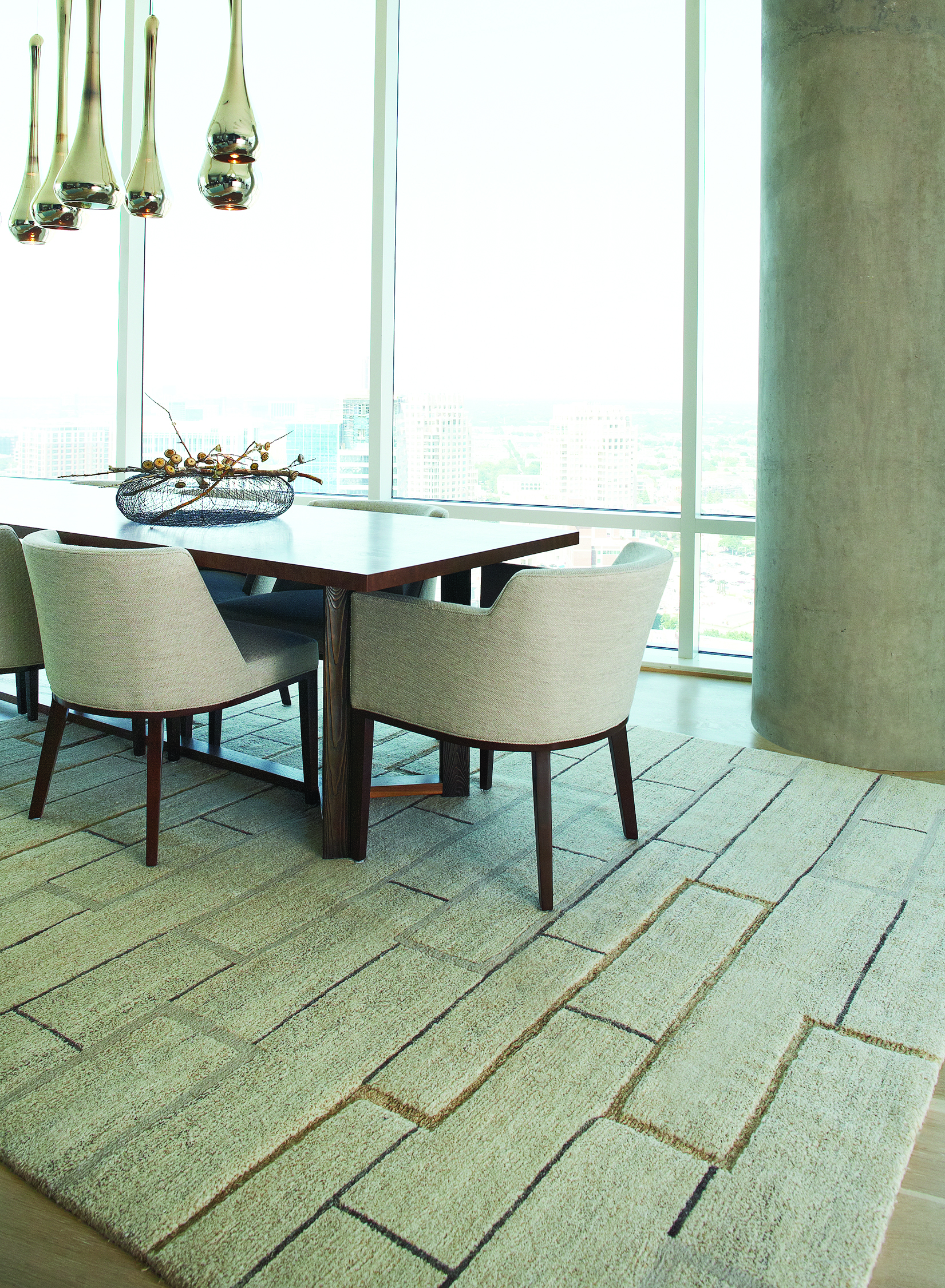 Most handmade rugs are woven by tying knots. There are four basic types of knots.

This is knot is formed when yarn is passed over two adjacent warp strands. Each end of the yarn is then wrapped behind one warp and brought back to the surface in the middle of the two warps.

This knot can be either symmetrical or asymmetrical. The knot is usually tied over four warps which aids in accelerating the creation process by lessening the time it takes to cut each knot and start anew.

In Tibet, a specific knot is used. A bar is put in front of the warp running horizontal with the weft. A single yarn is then looped around two warps and then once around the bar. When a row is completed, the loops are then cut to assemble the knots.

Rugs can range from 25 to over 1000 knots per square inch. An expert weaver is able to complete a knot in ten seconds, or six knots per minute, three hundred and sixty knots per hour. Therefore, a 9×12 foot rug with 150 knots per square inch could take one weaver two and a half years to complete. Handmade rugs are practical as well as beautiful works of art that require craftsmen and women to be patient and meticulous.

Rug materials also called the pile of rugs can be segregated into two groups:
Natural includes wool, cotton, and silk, to name just a few…

Wool is made from sheep, llamas or alpaca fur. Sheep wool is the most commonly used pile material in handmade rugs. Wool is a very durable high quality yarn in comparison to synthetic thread. Wool is also naturally resistant to fire, water, and some types of stains. In addition, wool is naturally resistant to dust mites, which can agitate people with allergies.

Cotton is a naturally strong fiber. This material is used mostly in combination with wool as a foundation. However, in some areas weavers like Turkomans use this material in small areas to create a contrast in the design of a rug.

Silk is the most expensive rug thread which is derived from the cocoons of silkworms, which flourish on mulberry plants. Originally, silk came from China but was later grown in other countries such as Iran, India, and Turkey. Currently, the best quality silk comes from China and the Southern Caspian Sea shores of Iran.

The History of Rugs

The first creation of rugs has been suggested to be during prehistoric times when people used animal hides on the floors of their shelters in order to keep warm at night. Historians have traced back the art of rug weaving to ancient sacred writings such as the Old Testament (Exodus, Chapter 36, verses 35, 37) which regarded carpets as precious artifacts in the building of King Solomon’s Temple (1014-965 BC). In addition, it is believed that different types of flat weave rugs were produced more than 4,000 years ago, as fibers were found in Egyptian tombs. More substantial proof came about in 1947, when a Russian archeologist, Rudenko, uncovered “Pazyrk” the oldest known rug on earth, frozen in a tomb in Siberia which dated back to 5th century BC. Before the discovery of the “Pazyryk”, a rug from the Sassani Dynasty, which was referred to as the “Spring of Khosrows” was the oldest known rug.

The Persians were truly the first to craft rug weaving into an art form. The “Spring of Khosrows” was an object of admiration to the King of Persia, Khosrow I (AD 531-579), during winters, as it served as a reminder of the beauty of a spring garden. The rug was made of mainly silk and embedded with many jewels such as emeralds to represent a green meadow, pearls, and sewn in with silver and gold thread. This marvel measured 400 feet x 100 feet and weighed several tons. It was later ripped apart due to its immense value by Arabs who had conquered the Persians. In the thirteenth century, Marco polo found some of the earliest dated rugs while wandering through Turkey and China. The Romans also valued rugs highly as they decorated their palaces with them from the floors to the walls. In addition, it was documented that Queen Cleopatra was presented to Caesar rolled up in a carpet.

The spread of rugs to Europe ties into major historical events. For example, when Eleanor of Castile married Edward I of England in 1255 and she brought Spanish rugs with her. However, rugs did not spread at that time to the area as most of the other inhabitants of England at the time had floor coverings of hay which included Queen Elizabeth’s own chamber. England continued with the hay floor covering method until the early part of the seventeenth century. In the late seventeenth century oriental rugs were brought to America. In the nineteenth century during the Victorian era, rugs gained popularity and came into large demand. At the present time, rugs are still being created by hand and made with vegetable, plants, and mineral dyed yarn as they were long ago in the areas that made the creation of rugs an art form.

Scroll back to top